“Wisdom tells me I am nothing. Love tells me I am everything.
Between the two my life flows.”
- Nisargadatta Maharaj﻿
﻿
Yesterday I went to a meditation and discussion session on mindfulness and no self, at the Abbotsford Convent. Over lunch at a lovely café there, I found myself discussing Japanese aesthetics with a Christian minister while sipping on genmaicha (green tea with roasted brown rice), served in pale green porcelain cups.

One of the aesthetic concepts my new friend introduced me to was Kintsugi, which literally means “golden joinery.”  It relates to the practice of mending breaks in pottery or porcelain by filling them with gold – or to be more accurate, with adhesive resin mixed with gold dust. In this way something broken can become more beautiful, through the process of mending, than it was to start with. Perfection, or looking “as good as new” is not the most valuable possibility, from this perspective.

Later, thanks to a fascinating essay written by Christy Bartlett to accompany an exhibition of Japanese mended ceramics, I discovered a suggestive connection between this approach to the repair of broken objects, and the teaching of no self that we were attempting to practice and understand in our meditation and discussion at the Convent.

Bartlett explains that in the context of traditional tea ceremonies in Japan, mended objects are seen as a physical embodiment of the spirit of mushin, or “no mind.” This state is associated with fully existing within the moment, non-attachment, equanimity amid changing conditions, and relinquishing the impulse to impose one’s will on the world.

Accidental fractures set in motion acts of repair that accept given circumstances and work within them to lead to an ultimately more profound appearance. The only willfulness in the process is the effort to assist with the rebirth of something whose existence has been threatened, something that has held value for others. 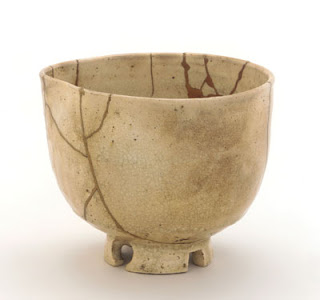 In this practice there is the wisdom of accepting change, and seeing that there is no permanent self to cling to, whether we are talking about a pot or a person. But there is also the compassion that senses the value in a broken bowl, or a life in crisis, and is willing to take the care necessary to carry it forward into a new form. The two apparently (or logically) contradictory impulses of wisdom and love are not in tension here. As Nisargadatta suggests, life flows between them.

This meeting of acceptance and care in turn evokes another Japanese concept, that of mono no aware, literally “the pathos of things.” It connotes a compassionate sensitivity to ephemera, an empathy towards, or even identification with transient things. This sense of connection springs from an appreciation of temporality, an awareness that just like fragile and well-used ceramics, we are all vulnerable to the gradual or sudden, but in case eventually inevitable, break up of the body.

This thought brings to mind my father, who is currently recuperating from a double knee replacement, happily a very successful “breakage” and repair of these well-used parts of his body.

Bartlett emphasizes that the impact of a carefully mended teacup or bowl (or kneecap, for that matter) is not just visual, but emotional. Historically significant mended items are often accompanied by lines of poetry, which enhance the object’s mute ability to evoke a simultaneous sense of rupture and continuity, fragility and resilience, life before the breakage and life after.

Often the tone of these verses is wistful, reflecting the fact that in Japan, mended ceramics are traditionally used only in the last two weeks of October, the waning days of autumn, known as the season of nagori. But sometimes the tone is humorous, emphasizing the transformative power of the imagination.

This is the case in a story told about a Korean Ido-style teabowl owned by a Japanese military leader of the sixteenth century, Toyotomi Hideyoshi. He had received this treasured object from an older leader, Tsutsui Junkei. One day, a page in Hideyoshi’s retinue dropped the precious bowl and it broke into five pieces. Everyone froze, fearing for the boy, since Hideyoshi was known for his fierce temper.

Then a guest (showing remarkable mindfulness) improvised a gracious comic poem, taking as his inspiration a famous verse about the passing of time as measured by a mark on a well curb. In the original poem the mark records the height of a boy, who has since grown up. In the improvisation, the well curb becomes a metaphor for the broken cup:

Tsutsui’s well curb
Became split into ﬁve
Alas for that well-deep bowl
All of the blame –
It seems to have been mine.

The poet’s words made everyone laugh appreciatively, and restored Hideyoshi to good spirits. Soon enough, the teabowl was also restored and given the name Tsutsui Zutsu (meaning well-curb). It continued to be used and cherished in Hideyoshi’s family for generations, occasionally returning to five pieces only to be mended again. Centuries later, the bowl and its five famous cracks are still in existence today.

Stories like this don’t just affirm the value of mending things that are broken; they also change our perspective on brokenness. They suggest that the value of gold-filled cracks might lie less in the gold, than in the unconventional beauty and interest of the cracks themselves.

After we finished lunch, and the minister left, I noticed a tiny, yellow and white flower that must have drifted down during our conversation, now floating in my unfinished cup of tea. 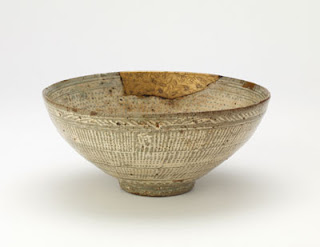 Hi Justine, I tried to leave a comment before but it didn't seem to work. I like your blog and have enjoyed all the entries. Found "On mending broken things" particularly wonderful and moving. regards, Jane Castles (yes, from undergrad philosophy days!)

Hi Jane, how lovely to hear from you! Thanks for your appreciative comment - glad you liked the post so much. What are you doing now?

Hi Justine, what is your email or are you on facebook? Might direct message you rather than boring your blog readers with a summary of my last 20 years!! Would be good to catch up sometime. My email is my name, no dots, gaps etc, at gmail.com and you can probably find me on FB x

Orlando Pavia and Susana (Can we think the way they dance?)